The following questions are often asked by visitors or new members navigating their way into the wonderful life of Orthodoxy. If your question is not answered below, please see Fr. Matthew or a member of the Parish Council. Ask!

What is Orthodox Christianity?

The term “Orthodox” means “correct praise” or “right doctrine.” During the early centuries of its history, when it was united, the Church was both orthodox and catholic; that is, it was the Church of “correct praise” and was “universal” (which is what catholic means).

The term “Orthodox” was used by the Church to separate itself from other groups that held false doctrines about God, Jesus, the Holy Spirit, salvation, and the Church. These groups were called “heterodox” or “heretics” by the one, orthodox and catholic Church.

When did Orthodox Christianity begin?

We trace our history back to the apostles and thus to Jesus Christ Himself. We believe that Christ brought the Church into existence, that it is empowered by the Holy Spirit, that it was to be led by the apostles and then by those whom the apostles were led to ordain (the passing down of this authority through time is called apostolic succession), and that it represents the presence of the body of Christ in this world.

Two major disagreements brought the united Church to this split — a split that created the Orthodox Church in the Eastern part of Christendom and Roman Catholic Church in the Western part.

One disagreement involved how the Trinity was to be understood. Orthodoxy stayed with the traditional understanding of the Holy Spirit as coming from God the Father, which the Roman Catholic Church adopted new language to say that the Holy Spirit proceeded from both the Father “and the Son.” It is hard for us to see today that this was far more than a debate about a word or two. As with so many debates over terms, something seemingly small contains within it radical differences.

A second disagreement between the Eastern Church and the Western Church arose over the authority of the Pope, the bishop of Rome. Orthodoxy views the bishop of Rome as the “first among equals;” meaning, the bishop of Rome is the senior and most highly respected of all Christian bishops of the undivided Church. The Roman Catholic Church, however, holds that the Pope is the sole head over the entire Christian Church. The Catholic Church insists on the “supremacy” of the Pope, while the Orthodox Church holds this bishop of Rome to have “primacy.” Since the split between East and West, the Patriarch of Constantinople (modern Istanbul), has been considered the “first amongst equals” of the bishops of Orthodoxy. The see of Constantinople was, according to Church tradition, founded by St. Andrew the Apostle.

The Eastern Church, what we call the Orthodox Church, did not experience the Protestant Reformation of the 15th and 16th centuries. The Eastern Church, at that time, was struggling to survive under Islamic domination. The Protestants were “protesting” some of the beliefs and practices (including the issue of the Pope’s authority) of the Western Church, the Roman Catholic Church.

Who are Orthodox Christians more like: Catholics or Protestants?

It is probably better to see Orthodox Christianity as a third understanding of Christianity, rather than more like one of the other two.

Protestant visitors to Orthodoxy will find certain similarities: both communities rejected the authority of the Pope, as we have said. Protestant visitors might also find Orthodox Liturgy to be especially beautiful, as the service is based upon scores of Biblical passages — perhaps, something like a spoken and sung “stream of scripture.”

Catholic visitors to Orthodoxy will find many similarities in Orthodox worship and belief to their own. Both communities accept the same seven sacraments as the means by which Christ is present in His Church (baptism, confirmation, confession, Eucharist, ordination, marriage, holy anointing), and both believe that Christ’s presence in the Eucharist (Communion) is a real, and not a symbolic, presence. Both communities also hold to the traditional meaning of apostolic succession; that is, that the current priests and bishops were ordained by a line of previous bishops that goes back to the original apostles and to Christ Himself.

When people come into an Orthodox Church, they light a candle. Why is this?

Coming into our Church from outside, you first enter the narthex, which is a kind of “half-way” space between the outside world and the temple. Lighting a candle in the narthex can mean several things. One purpose is to signify, as we light the candle, that we wish to leave our worldly cares in this room before we enter the temple.

Another reason for lighting a candle may be that we are remembering someone who is in need. We say a brief prayer for them as we light a candle and kiss one of the icons. In a way, then, our worship begins out in the narthex, even before we come into the worship service itself.

Why do worshipers kiss the icons?

Icons, the painted pictures of Christ, the Virgin Mary, the saints, or sacred events, are very important in Orthodox worship. These icons mean far more to us than ordinary paintings. Icons are windows into the sacred realm, into the kingdom of God. The persons portrayed on these wooden icons are, in a spiritual way, present with us. We kiss the icon to show love and respect, even as we might kiss the picture of a family member to show the same.

Does kissing icons mean that Orthodox Christians worship the icon or the person portrayed?

No. Only God (as Trinity — the Father, Son, and Holy Spirit) is worthy of worship. The Virgin Mary and the saints are worthy of our deepest respect and love, or what is called “veneration.” As was said above, even as we might kiss a picture of a loved one, so we kiss the icons to show our love and respect for these spiritual beings who are alive with Christ and, therefore, with us in worship.

Is there anything about the inside of an Orthodox Church that might help me understand Orthodox Christianity?

Yes. The structure of Orthodox places of worship offers visual lessons of our heritage and beliefs. Although we have adopted the Western use of the term “church” for our place of worship, it is more accurately termed a “temple.” By this, Orthodoxy means to highlight that we are more than a gathering of people who come together for praise, prayer and learning. We are, in this place, in the very presence of God — even as the Jerusalem Temple provided access to God (the Holy of Holies) in the Old Testament and early New Testament periods. Various elements of Orthodox architecture, as well as elements of our worship (some will be discussed below) relate to the “temple” nature of our churches.

Secondly, Orthodox churches throughout the world tend to conform to certain repeating architectural patterns, many of which retain ancient elements from the very early centuries of Christianity. Most Orthodox churches have a huge dome covering the congregation. It is not coincidental that the dome is globe-shaped. In worship, the dome symbolizes that we are in a new world, the kingdom of God. There is typically a large icon of Christ as Ruler of the World (the “Pantocrator”) painted within the domes of many Orthodox churches.

Are the Service in English?

Yes, all services are mostly in English. In honor of the Church’s Greek historical roots and the cultural heritage of many of our parishioners, there will also be certain parts of the service and some hymns in Greek, but our service books and Sunday Bulletin offer English translations for almost everything said in Greek.

A Taste of Greece To-Go 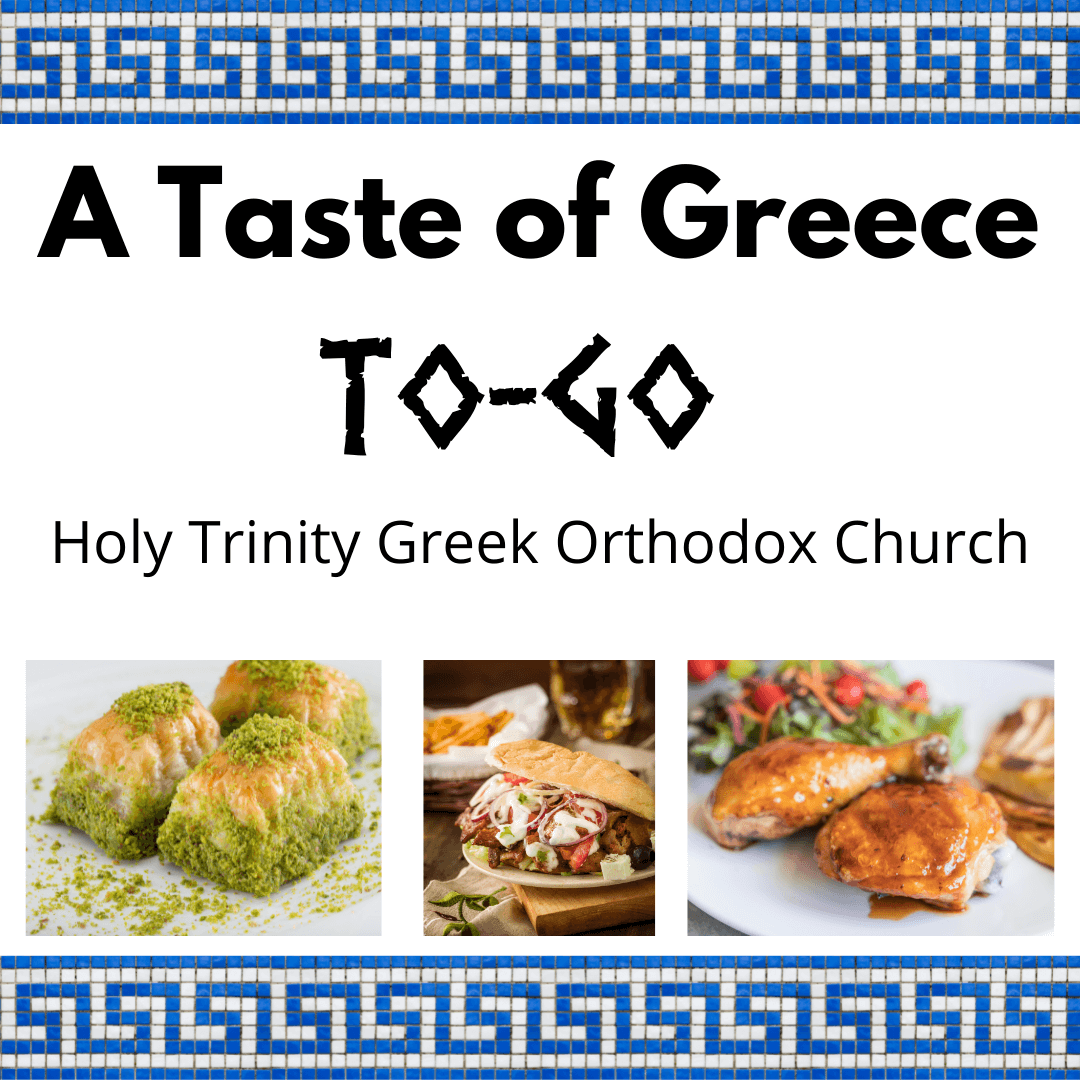